Guide Poll about Vleminckstraat and surroundings

You are here: Home1 / Guide Poll about Vleminckstraat and surroundings

After more than a decade at Antwerp’s Steenplein, Antwerp by Bike moved to a new location on January 1, 2023! From now on, you can find us in Vleminckstraat 15A, in a beautiful new building next to PRINTSHOP and close to Dille En Kamille.

For the occasion, Guide Poll dove into the history of the surrounding streets.

He teaches us that Vleminckstraat was named after the Vleminck family, which played an essential role in 16th-century international trade. Poll explains, “Jan Vleminck Sebastiaanszoon was the leading scion of the family. As a banker, merchant, and patron, he played a prominent role in Antwerp’s economic and cultural life.”

In 1561, Jan Vleminck married, and he and his brand-new wife settled in Vleminckstraat. Poll: “He bought the property called ‘den Saulsboom’ that opened up Vleminckstraat. The property possessed an entrance gate, a courtyard, stables, a court, and a pavilion with an exit that opened onto the Oude Veemerckt or Hoendermerckt.” The building that houses Antwerp by Bike today is a traditional broad house from the second half of the 16th or the first half of the 17th century. Poll: “It was the printing office a maritime insurance company until the late 20th century.”

Beggaardenstraat, named after the Beghards

To the east, Vleminckstraat opens onto Beggaardenstraat. Guide Poll explains: “Beghards are monastics who belonged to the same spiritual movement as the better-known Beguines. Their name comes from their patron saint Begga. They settled in Antwerp in 1228. They were almost all weavers who made their own living and lived separately. Until they united in 1290 and submitted themself to the rules of St. Francis.” Their monastery was located between Eiermarkt, Korte Nieuwstraat, and Sint-Katelijnevest.

Poll: “The monastery was abolished during the Antwerp Republic, between 1577 and 1585, when the city of Antwerp was ruled by Calvinist insurgents. The church was demolished, and a street, the Zuerstraat (current Sudermanstraat), was formed. After the recapture of the city by Farnese in 1585, the Beghards regained their property. They asked for the street to be closed, but it was refused because it had become the extension of Vlemick Street, connecting the Melkmarkt to the trade center. And that was convenient for the merchants and their goods.” 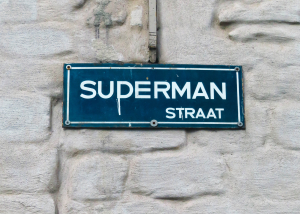 Sudermanstraat, renamed “Superman street” by students years ago with the help of a marker, is named for Henri Suderman, a wealthy 14th-century German merchant. “But he is better known as a benefactor who devoted his resources to the suffering,” Poll points out. “As many as five foundations are attributed to him, including the Alexians and the Alexian Sisters, who cared for people in their homes in the city. In 1343, Hendrik Suderman also founded a house of worship for 12 needy women out of gratitude for surviving a shipwreck. It is somewhat cynical that he did not return from a sea voyage shortly after that.”

Eiermarkt, the market of Teun, the egg farmer

At the corner of Sudermansstraat and Eiermarkt hangs a magnificent statue of Mary with a light arm. This figurine from the 18th century is rather exceptional because it is a seated Mary. “But the most striking figure of the Eiermarkt is Teun the Egg Farmer,” Poll said. “According to folklore, Teun the Egg Farmer was madly in love with Lijn the Milkmaid. Their figurines used to be on public pumps in the city’s markets. Antwerp people hung all kinds of pamphlets on pump columns back then, usually with critical comments on the political goings-on in the city. Bystanders would then read the pamphlets aloud. The figurines were seen as the sounding board of the people.” Lijn the Milkmaid is part of the MAS Museum’s collection today. Teun has a replica standing against the facade of the Grand Bazar shopping center. 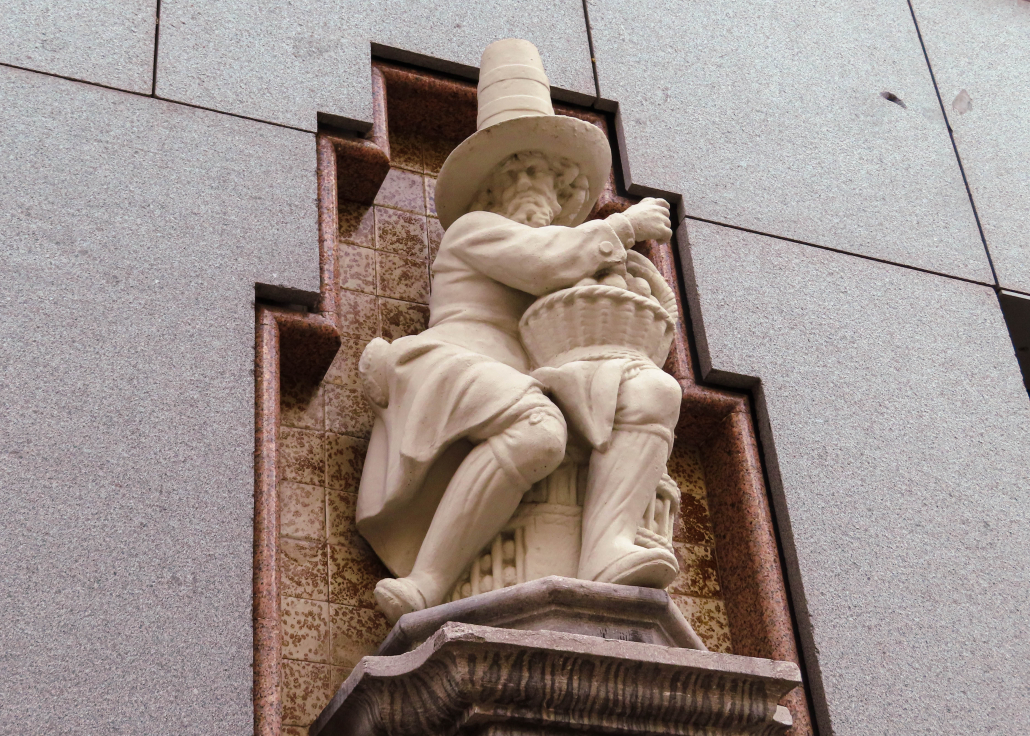 The Melkmarkt has been a memorable passage since the 12th century. The Melkmarkt originated in a neighborhood with numerous markets selling all kinds of foodstuffs, building materials, and fuels. Poll: “The Melkmarkt used to be split in two by a moat from the first walled enclosure. Near Wijngaardstraat, a bridge across the moat called the ‘Zuivelbrug or Melkbrug’ took you to ‘Zuivelmarkt,’ where merchants of butter, milk, and cheese stood.” Today, the Milk Market is primarily home to one of Antwerp’s most famous music cafes: the Muze. De Muze was opened in 1965 by two West Flemish people who came to Antwerp in the early 1960s to study at the Academy. The furniture of the Muze was bought from the Salvation Army, and the taproom was handcrafted from old floorboards. Because of the quirky living room atmosphere, many artists find their way to the Muze. The legendary cafe went bankrupt in 2017 but found an acquirer in 28-year-old Joris Veyt, who has ensured that today the business is running as before. Poll: “De Muze is a traditional Belgian pub with many great beer choices. The multiple floors make it extra cozy. On some days, there is also live music. In short: worth a visit!”

This website uses cookies to improve your experience while you navigate through the website. Out of these cookies, the cookies that are categorized as necessary are stored on your browser as they are essential for the working of basic functionalities of the website. We also use third-party cookies that help us analyze and understand how you use this website. These cookies will be stored in your browser only with your consent. You also have the option to opt-out of these cookies. But opting out of some of these cookies may have an effect on your browsing experience.
Necessary Always Enabled
Necessary cookies are absolutely essential for the website to function properly. This category only includes cookies that ensures basic functionalities and security features of the website. These cookies do not store any personal information.
Non-necessary
Any cookies that may not be particularly necessary for the website to function and is used specifically to collect user personal data via analytics, ads, other embedded contents are termed as non-necessary cookies. It is mandatory to procure user consent prior to running these cookies on your website.
SAVE & ACCEPT